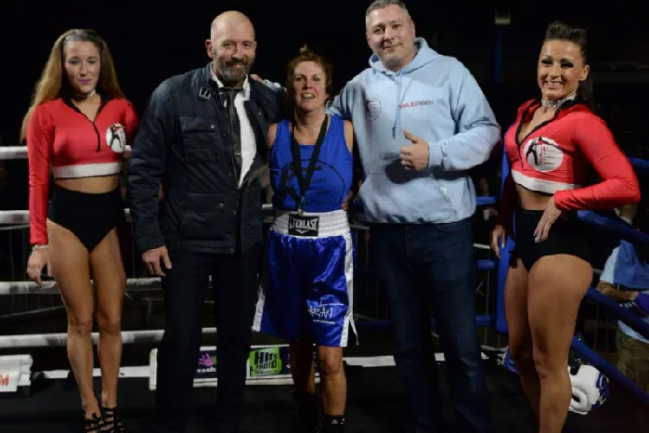 A Garstang martial arts expert took a step into a new sport when she decided to take up boxing for charity.

Cathy Dickinson raised some £2,000 after gamely pledging to take part in her very first boxing match at the age of 60.

She fought a much younger opponent in Manchester recently after several weeks of training.

Initially, the plan was to use the match sponsorship help fund extra treatments for a friend in the martial arts community who was suffering from cancer.

Sadly Tony Pillage died before Cathy’s match. She decided to continue and raise funds instead for his funeral costs.

Micheal said: “It was a full-contact boxing match. She had never done it before but decided she would have a go at it. She’s frightened of nobody!”

Stepping out as Cathy “Crazy” Dickinson the plucky business owner fought three two minute rounds against the younger Tracy “Mayhem” Moir and the result was declared a draw.

The beginner’s sport is known as white collar boxing. Cathy’s fight was watched by hundreds of spectators including some 30 family and friends, including two of the couple’s four children. 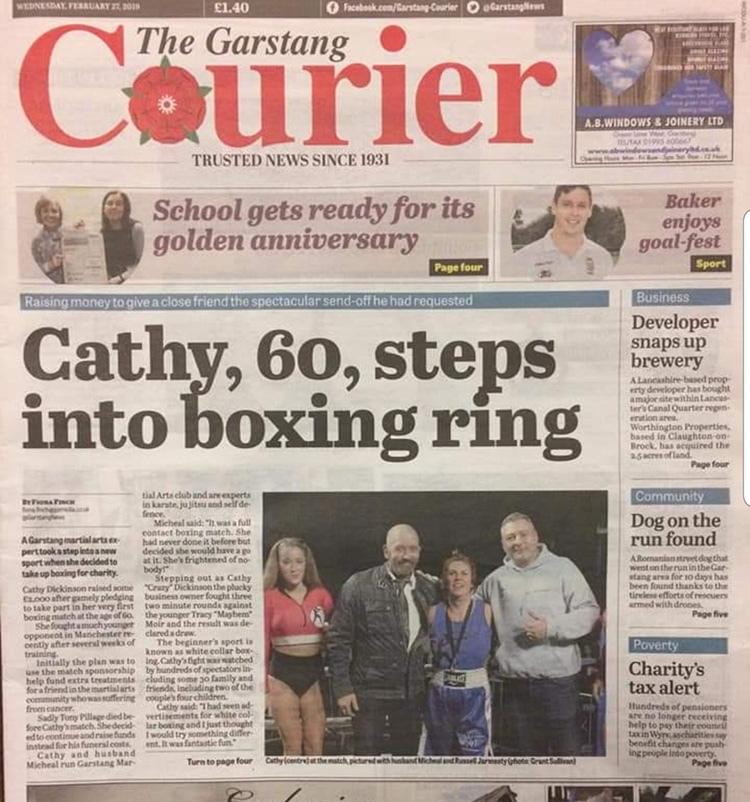 Cathy said: “I had seen advertisements for white collar boxing and I just thought I would try something different. It was fantastic.

Cathy paid tribute to Russell Jarmesty of Manchester and Stephen Jones of Garstang for their training, tips, help and support as she prepared for her big fight.

She continued: “Anthony (Tony) Pillage has friends all over who very generously was sponsoring me, as were my family and friends.”

“He wanted an extraordinary send-off – not run of the mill. Everybody had to be dressed up. Everyone was in bright colours. It was wonderful. It was a celebration of his life and his love of life.”

As for the match, Cathy says Tony would have been delighted at her achievement. With the support of Tony’s wife, she wore his fluffy hat for her grand entrance into the boxing ring, had an illustration of his face on her shorts and tied his chain and Thor necklace into her boxing boot.